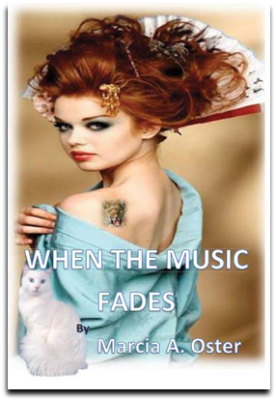 At 25, Brett Sinclair is still living at home in upstate New York. Then her father abruptly dies from a brain aneurysm. The home she grew up in goes to her oldest brother, Brant, and his wife, Evelyn. Her closest brother, Jarrett, offers her a place at his ranch. To make the transition easier, they have gotten her a white long-haired ragdoll kitten whom she names Macloud and calls Mac.

Her brothers have hired a young new sound technician, Quinn Mallory. Circumstances put Brett into a situation where she is bothered by how her brother Brant treats Quinn during a Holiday visit. Thrown together again for the Christmas Holidays, Quinn mistakes Brett’s attempt at being extra nice to him as love. With her brother Jarrett, she plans a visit to her brother Justin’s ranch outside Casper, Wyoming.

In Wyoming, instead of a pleasant vacation with her brother’s family, she discovers Quinn has followed her with unknown intentions. A series of escalating events has Brett’s brothers helping her to disappear with the Sheriff who is handling the incidents at Justin’s ranch. Sheriff Russ Hawk starts out protecting Brett but ends up falling in love. Now, in love, on the run and hiding from an insane maniac, Russ and Brett go to his hunting cabin on the Wind River Reservation. Brett finds herself joined to a new family very eager to protect her and the baby she’s carrying. After the birth of his son, Russ learns that there are strangers on the reservation hunting . . . for them. Quinn has disappeared.

Russ’s uncle tells Brett he can only save Russ’s son and for her to warn Russ. She doesn’t know Uncle was killed by Quinn the day before. On a rampage, Quinn finds them in Butte, Montana. He kills Russ, injures Skybird, and leaves Brett in a coma before fleeing. Now Jarrett has to find a new hiding place. Sheriff Eric Weber from Columbia Falls, Montana, is brought in to handle the situation. His newly-widowed mother, Lorna, is very happy to help Brett with her now two-month-old son, Holt. Brett and Holt move into Lorna’s home after Brett is released from the hospital.

Knowing that Quinn is still out there and still hunting for Brett, two of Russ’s cousins show up to track Russ’s killer and avenge his death. Now totally insane, Quinn breaks into Lorna’s home intending to take Brett and her son back with him to his parents. Wise Owl is there to interpret Brett’s dreams from Uncle. Dubungu is there to accurately throw Uncle’s war lance and end Quinn’s reign of terror for good. Now all Brett has to do is figure out where her future happiness lies. Brett hopes to find a new song back in her heart and love back in her life. Back at the Wind River, she finds herself in need of Dubungu’s services again to keep her son from Quinn’s father’s grasp. Daniel Cheveyo is Dubungu.

He has lost his heart to Brett and her young son. Now he may be forced to lose his soul to end Brett’s torment.

The Rest of Brett’s Siblings ~

Pastor Wickham “Wick” Addison ~ Justin’s pastor in Casper, Wyoming. He’ll help Brett as much as he can.

Macloud, nicknamed Mac ~ [3]. A white long-haired ragdoll cat. He’s not sure of Quinn at first and as time goes on, he’s really not thrilled with Quinn at all. If only he could get someone to understand what he’s trying to tell them. He likes Russ and tries to fill him in on what’s happening. He tries to let them know when Quinn’s around at Justin’s but no one listens to him . . . he’s a cat. Then he tries to tell Wise Owl and finally, someone who listens, but is it too late?

Sheriff Russell “Russ” Hawk ~ [40] A Northern Arapahoe Native American, ex-Marine, Sheriff in Casper, Wyoming. Called to the scene of the crime to discover the love his life lacks. He has a plan to protect and serve Brett by hiding her on his family’s Wild River Reservation. She gives him a son, but Quinn threatens to take it all away from him.

White Buck, Rainfall, Rusty, Tom, and Summer ~. Cousins of Russ’s willing to put their lives on the line to protect the newest additions to their family.

Two Bears and Fierce Skybird ~ Younger brothers of White Buck. They are going to protect Brett from the evil man chasing her. They find that Brett has a lot of surprises for them.

Uncle ~ Brother to Russ’s father. Proud to spearhead the families’ efforts to protect Russ and his new wife and son. Charmed by Brett, who is now called Shadow Hawk. He performs their marriage ceremony, advises them of the baby she carries and provides shelter, love and words of wisdom. Even death cannot prevent him from keeping his promise to safeguard their child.

Wise Owl, Dubungu/Daniel Cheveyo ~ Shoshone warriors / Blood brothers who are there to assist Russ while he is hiding and avenge the wrongs that are done. Wise Owl is willing to listen to Mac and to understand. Dubungu is sworn to find the evil man and end his reign of terror permanently. He will cut off the head of the Viper or die trying.

Cyrus Saxton ~ Blackfoot, ex-Marine friend of Russ’s. He leaves his bar in Columbia Falls, Michigan, to come to Russ’s aid. His best efforts fail once again.

Sheriff Eric Weber ~ [34] When Brett is brought to Columbia Falls to the local Hospital, Eric ends up involved in the Sinclairs’ lives. Jarrett needs someone to help his sister tend her newborn son while she recovers from a three-week coma. Eric needs something to give his newly-widowed mother a reason to live. He’s not planning on falling in love with this young woman and her son.

Lorna Weber ~ [63] Her husband, Ian, murdered six months ago. Their retirement plans dead and buried with him. She has three fine grown sons but no grandchildren. She always wanted a daughter and discovers that Brett truly needs her friendship and love. Holt easily captures her heart with his tiny charming smile. She’ll kill to protect him and Brett and dreams that maybe now she has a reason to stay healthy. If only Eric will fall in love with Brett and give her grandchildren to spoil.

When the Music Fades, by Marcia Oster, may be purchased online through these merchants. Click on any of these links to find out more.

You may also purchase a signed copy directly from the author.